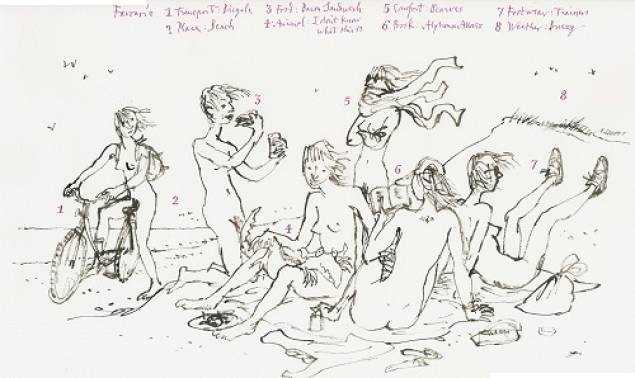 'What are you Like?' exhibition at Chris Beetles Gallery: until 22 May

Selling exhibition to benefit the House of Illustration
This exhibition offers a unique opportunity to purchase original works that were produced in 2008 by an extraordinary roll call of artist-illustrators, painters, designers and public figures for whom drawing is important. Each work is autobiographical, based on the Victorian parlour game in which players were asked to describe themselves through a series of drawings of their favourite things.

The original exhibition toured to ten different museums and galleries around the UK, finally coming to an end in 2014, by which time it had been seen by almost half a million people. The exhibition anticipated the opening of House of Illustration in Granary Square in July 2014, and the contributors have very generously agreed for their work to be sold to enable the organisation to continue to pursue its enterprising exhibition programme, to extend its illustration-led learning work and to promote new illustration talent. House of Illustration receives no public funding and so is entirely reliant each year on fundraising.

All proceeds from the sale will benefit the House of Illustration, as Chris Beetles Gallery has very generously waived all fees.

For more details and to see all the works on show, visit Chris Beetles Gallery at 8 & 10 Ryder Street, St James's, London SW1V 6QB, 10.00am - 5.30pm, or go to www.chrisbeetles.com/exhibitions/what-are-you.html
Links:
Find out more about the House of Illustration at: www.houseofillustration.org.uk