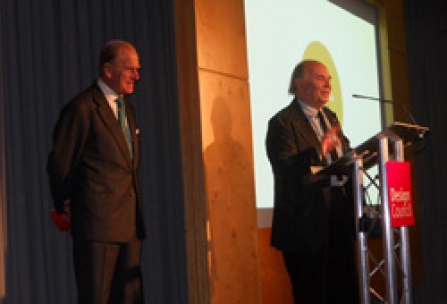 On 29 November 2011, Quentin Blake became the newest recipient of the prestigious Prince Philip Designers' Prize. In a packed award ceremony at the Design Council in London, HRH the Duke of Edinburgh made his final presentation of the prize to Quentin. The Duke is stepping down as Patron of the Prize after 52 years, as part of the general reduction of his Royal duties.

The shortlist for the 2011 prize encompassed one of the widest ranges of design disciplines in the Prize's history, from museums and gallery designers to millinery for Kylie Minogue and hydraulic ankles. Sir Paul Smith and milliner Stephen Jones joined the line-up, whilst architecture was also well represented with internationally respected names such as Wilkinson Eyre and Sir David Chipperfield being nominated for their huge contribution, alongside giants of digital, sustainable and strategic design.

Accepting the prize, Quentin highlighted the part that collaboration plays in all design works, particularly given the wide spread of design disciplines covered by the award nominees, all of whom had met the judges' criteria for 'outstanding achievement in design for business and society'.

A special certificate was presented to the Duke in gratitude for his support.  It included a drawing by Quentin, which, as he remarked to the BBC, 'is more respectful than many 18th Century caricatures of the Royal Family!  I hope he likes it.'   To see the whole interview, go to: BBC News
http://www.bbc.co.uk/news/entertainment-arts-15927600