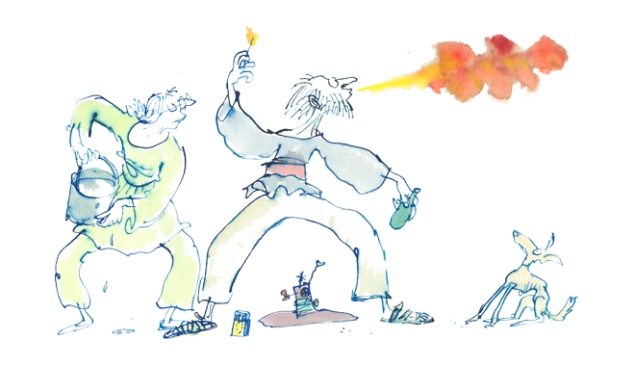 'Quentin Blake: As Large as Life' at Bankfield Museum, Halifax

This exhibition brings together nearly 60 works for hospitals which Quentin has produced over the last six years.
Four series are featured in the show, encompassing work directed at a range of ages. 'Our Friends in the Circus', a series from 2008 showing elderly circus performers in action, is for an older adults' mental health ward at Northwick Park Hospital in London; 'Ordinary Life in Vincent Square' (2010) shows people of all walks of life engaged in everyday activities, and was commissioned for a clinic which specialises in treating patients with Eating Disorders; 'Welcome to Planet Zog' shows young people and aliens experiencing the hospital environment (for the young people's mental health centre in Harrow, 2007); and 'Mothers and Babies underwater' is a look at some of the works produced for the new maternity hospital at Angers, in France, which opened to the public in October 2011.   All the works on display are giclée prints - digital copies - enlarged to almost life size in some cases, shown in the same style of frames as they appear in their hospital settings.

The exhibition is organised by Compton Verney in association with the House of Illustration. Bankfield Museum is the latest venue to host the exhibition in a UK tour which is due to run until 2014 - and has already attracted thousands of visitors while on tour in London, Scotland, Newcastle and Merseyside.

The show is at Bankfield Museum from 2 February - 13 April 2013.  For more details and opening times, visit the Museum pages on Calderdale Council's website.  To see more works featured in the show and to find out further information about the rest of the UK tour (dates in 2014 have not yet been confirmed) please go to our Exhibitions page;  or download the 'Quentin Blake: As Large as Life' app from the iTunes store, here.