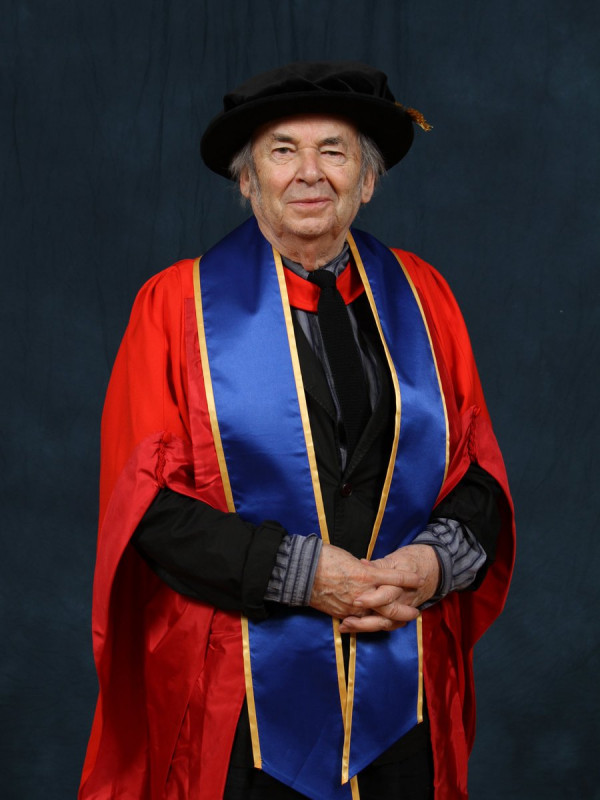 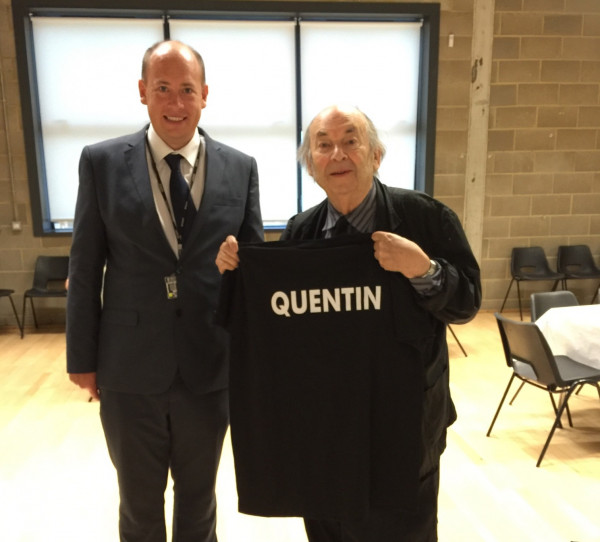 At the 2016 graduation ceremony on 16 September, Quentin was created an Honorary Fellow of the College, celebrating his work as an illustrator and his local connection with Sidcup, where he was born in 1932.  He joined a list of distinguished theatre professionals including Rosalie Craig, Jane ‘The Hat’ Smith, Murray Melvin and Sheila Reid to be conferred as Fellows and Honorary Fellows of Rose Bruford College of Theatre and Performance.  They were joined by the College’s President Sir Richard Eyre, Deputy Mayor of Bexley Cllr. Val Clark, Chair of Governors Monisha Shah and over 200 students, professors and academics at the College’s Graduation Ceremony in the Rose Theatre.
Before the ceremony, Quentin was presented with his own customised t-shirt from the College's Youth Theatre, of which he is Patron.  He is pictured receiving it from Alec Brand, on behalf of the College staff.

In his brief acceptance speech, Quentin highlighted the role the theatre has played in inspiring his illustrations, commenting: “I value this Fellowship enormously not only because Rose Bruford College is located in Sidcup, where I grew up, but also because it is a Drama School and drama has been one of the major influences on the way that I work.”  He also noted that his own educational journey had begun just along the road from the College at Lamorbey School, which he attended as a primary school pupil in the 1930s before progressing to Chislehurst and Sidcup Grammar School, also in the town.

Chislehurst and Sidcup Grammar School now boasts a 'Quentin Blake Art Building' (opened in 2007) where a small exhibition of Quentin's works were on show in June 2015 to co-incide with Rose Bruford College's 'Sidcup Words and Music' Festival in which Quentin participated.

Links:
See further details of the ceremony on the Rose Bruford College website