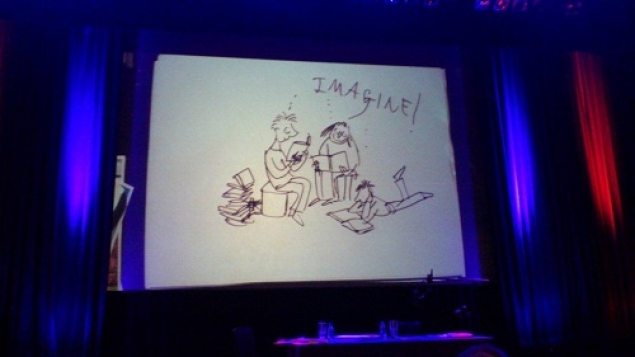 Quentin at the 'Imagine' Festival, 23 February

Roald Dahl's principal illustrator entertains capacity crowd
To celebrate the 50th anniversary of the first publication of Roald Dahl's classic book 'Charlie and the Chocolate Factory' Quentin spoke about the process of developing drawings and working with the world's No. 1 story-teller.
Addressing a sell-out audience at the Southbank Centre's Queen Elizabeth Hall, Quentin gave fans an insight into the creative process by showing some of the original working drawings from his archive.  He described how The BFG came to look the way he does, showing some of the early drawings of a very tall, thin giant in a long apron and knee boots.  His notes on possible other items of clothing for the Big Friendly Giant record other alternatives which never made it into the final drawings, familiar to millions of children across the world for the past 30 years.

In conversation on stage with Nicolette Jones, children's books editor of the Sunday Times, Quentin described working on the illustrations for 'Charlie and the Chocolate Factory' in the mid-1990s after Roald Dahl's death.  At that time he was commissioned by publishers Puffin Books to illustrate all of Roald Dahl's books which had been published before their collaboration began in 1977.  'Charlie and the Chocolate Factory' (first published in 1964) had by then had a long and distinguished tradition and had been ably illustrated by a number of other artists, so it was an exciting opportunity to place his own distinctive style on the classic work.

The audience were enthralled by pictures and descriptions of one of the characters who was deleted from the final version of the story, one 'Miranda Mary Piker' ('How could anybody like her?') who fell foul of some Spotty Powder in Mr Wonka's factory.  Quentin used a visualiser to draw on-the-spot pictures of Miranda Piker and the other familiar characters as he talked.

Quentin concluded with an inspirational drawing to encourage everyone to harness the power of their imagination!