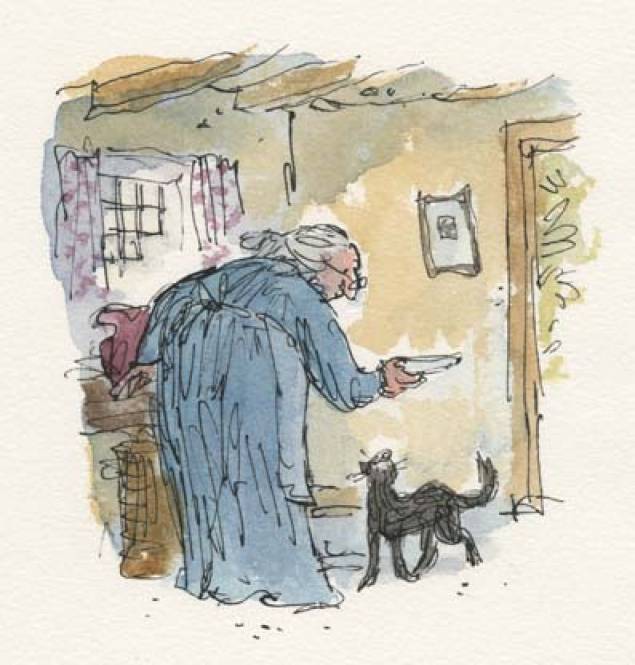 'The Tale of Kitty-in-Boots', publishing in September 2016
2016 commemorates the 150th anniversary of Beatrix Potter's birth in July 1866, including the release of a previously unpublished story which has lain in her archive complete and unillustrated for over 100 years.  Quentin Blake has been commissioned by publishers Penguin Books, owners of the archive, to illustrate the story, to sit alongside Beatrix Potter's other 23 tales, which she both wrote and illustrated.

'Kitty-in-Boots', the story of a 'prime black cat who leads something of a double life' will be published in September 2016.  Quentin Blake commented: 'I liked the story immediately - it's full of incident and mischief and character - and I was fascinated to think that I was being asked to draw pictures for it.  I have a slight feeling that it's been waiting for me.'

Quentin also contributed to a Channel 4 documentary, broadcast on More 4 on 26 January, in which actress and Beatrix Potter enthusiast Patricia Routledge introduced the author's life and writings.  'Kitty-in-Boots' was written in 1914, at the height of Beatrix Potter's fame, but remained unillustrated by the exceptional artist apart from a single drawing of how she imageined Kitty might look.

Asked if he felt a sense of being overwhelmed by the invitation to put pictures to Beatrix Potter's words, Quentin responded: 'When you're doing books, the problems are the interesting part!  [Beatrix Potter's] art was very special in a way, because she could tell a story - dramatise a story - in pictures'.