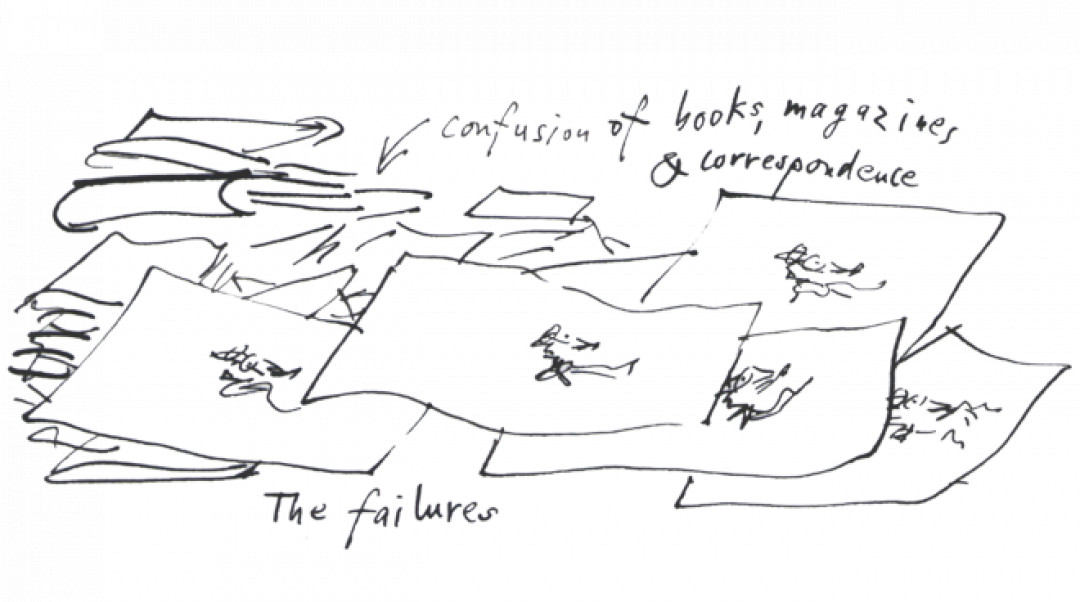 lire en français
I do a freewheeling sort of drawing that looks as though it is done on the spur of the moment. However even a single drawing needs a certain amount of preparation and planning.
Most of the time I need to do a rough in which I find out how people stand, what sort of expressions they have and how they fit on the page. For a sequence of drawings more planning is needed, and one needs to think of a number of questions at the same time (which is part of the interest of the job):
The Lightbox Technique
On the light box I put the rough drawing I am going to work from, and on top of that a sheet of watercolour paper, normally Canson or Arches fin. Ready to hand is a bottle of waterproof black ink and a lot of scruffy-looking dip pens. Essentially each of these is a straight double-ended holder (a German make called Brausse) with a nib, which is flexible and scratchy, or a J nib, which is harder and broader. Or it may be some other kind of nib, or a brush, or a reed pen, depending on the needs of the job.

What happens next is not tracing; in fact it's important that I can't see the rough drawing underneath too clearly, because when I draw I try to draw as if for the first time; but I can do it with increased concentration, because the drawing underneath lets me know all the elements that have to appear and exactly where they have to be placed. Normally I begin with the most difficult piece of the drawing - some particular facial expression, some particular gesture or stance - so that if I get that wrong, I don't have to repeat the whole of the drawing. Consequently, it's not impossible for me to find myself at the end of a session of work surrounded by expensive sheets of watercolour paper with a small face bearing not quite the right expression in the middle of each.

There are various other stages at which I may have to stop and start again - the drawing may be finished but uncoloured or even completely finished before I decide that it lacks some flavour hinted at in the rough, or that there's some quality of line or colour that doesn't seem quite consistent with the rest of the book. And sometimes I may do two or three finished versions in the search for some phantom felicity. This comes under the heading of Artist's Neurosis, and later I am not always sure why I made the choice I did or if it was the right one.

Take a look at videos of Quentin creating and discussing his artwork. Our featured video shows Qu...