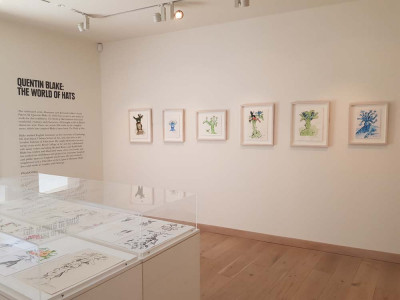 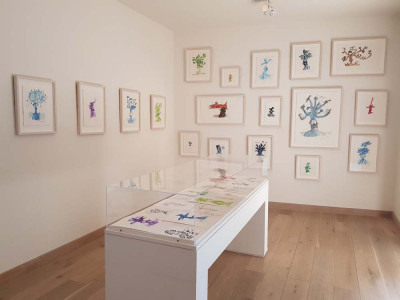 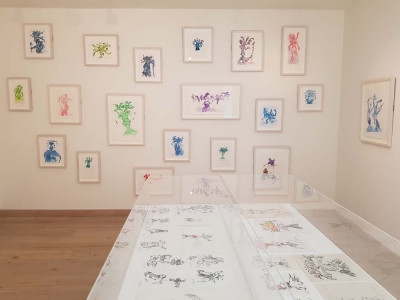 The World of Hats

A stunning exhibition of new work by Quentin Blake goes on show at the Jerwood Gallery until January 2019.  'The World of Hats' is a fantastical exploration of headgear in a variety of  sizes and media - from pencils to ink, and watercolour markers - all of which have been created in Quentin's studio in the past eight months.

Quentin says:  "I have been aware for a long time of the decorative possibilities of hats, so that when I was asked by Liz Gilmore at the Jerwood Gallery to create another in a series of small scale exhibitions that was the subject that naturally came to mind.  It seemed to me that about forty works, of varying sizes, would be more than enough to fill the space.  However, once started, I was so taken with the activity that whenever I felt like drawing something it turned out to be another hat.  While I was at work on the series I also discovered Windsor & Newton watercolour markers which gave me extra motivation of experimenting with them. By the time I persuaded myself to stop I discovered I had a collection of well over a hundred drawings.

All sorts of objects and activities appear on the hats, and I am often not quite sure if the wearers are aware of them.  Perhaps the most interesting hats for me are those where yet another face appears – it’s almost like seeing a mask and the face behind it at the same time.  I came to feel eventually that the hats have taken on a sort of like of their own.  Some of them clearly waving; I hope that one or two may even be waving at you."

A full-colour catalogue and associated merchandise to accompany the exhibition are available to buy at the Gallery, as well as selected original artworks from the show.  As a Patron on both Jerwood Gallery and the Hastings Storytelling Festival, Quentin is donating proceeds from the sales of artwork to them, to support their work to enrich cultural life in Hastings.  For more details about sales, please contact the Gallery.