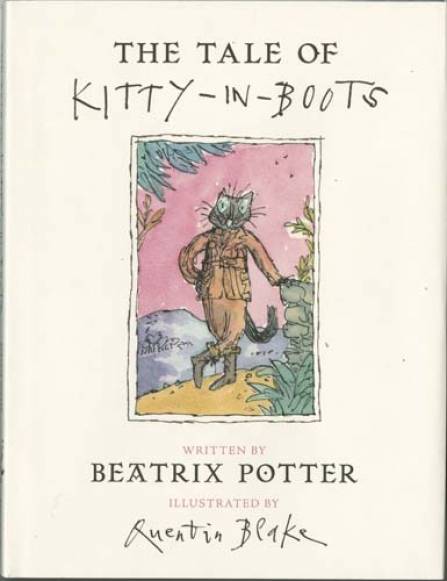 'The Tale of Kitty-in-Boots' published after 100 years

1 September 2016 sees the publication of a rediscovered story by Beatrix Potter, 'The Tale of Kitty-in-Boots'.  Though the story was completed in 1914, Beatrix Potter did not find the time to illustrate it, so Quentin Blake was commissioned by publisher Frederick Warne to provide illustrations which would bring the largely-unknown story to a global audience.

The story of an apparently genteel and well-behaved black cat called 'Catherine St Quintin' ('Kitty' for short) who unsuccessfully tries to become a poacher has been brought out to coincide with the 150th anniversary of the author's birth, in 1866.

The book has been eagerly anticipated since its announcement in January 2016, topping the best-seller lists in pre-order some nine months before publication.

Quentin has shared some of his thoughts on illustrating the book in an article for the Telegraph - including his theory that the blue-jacketed middle-aged rabbit who appears is Peter Rabbit.  He explained, '..he is  also quite bad-tempered, lively, aggressive  and ready to attack a pair of stoats with  his umbrella. I found that much more entertaining to draw than when he was small and eating lettuce.'

Read the full article here
Quentin's a blog post for the Huffington Post's Entertainment pages talks about the genesis of the book and his own illustrations: read it here
An exhibition of the complete artwork from the book is at the House of Illustration from 2 September 2016 - 5 February 2017.