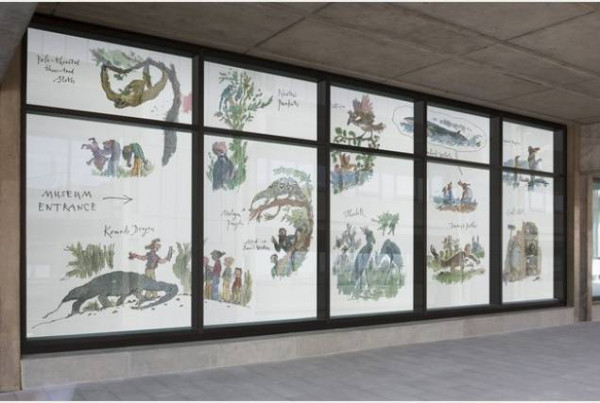 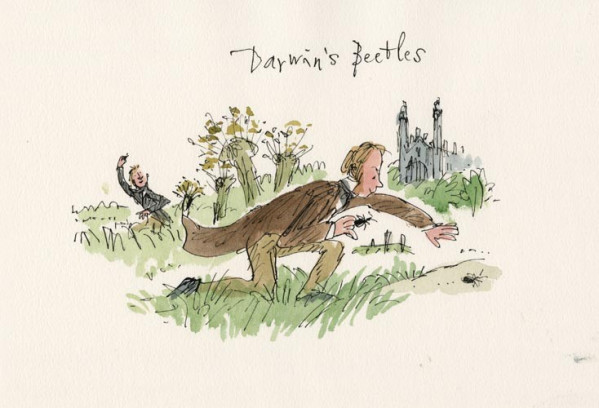 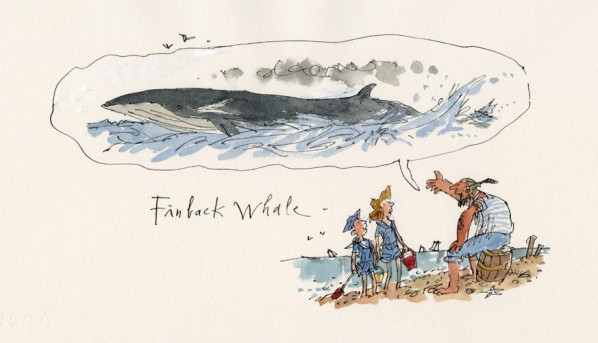 New drawings unveiled for the Museum of Zoology, Cambridge

Quentin draws inspiration from the Museum's collection
Quentin has created a series of blinds for Cambridge University's newly-refurbished Museum of Zoology. They will be visible from the outside of the David Attenborough Building on Pembroke Street, the recently-renamed home of the museum. The installation of the blinds is a significant step towards the re-opening of the museum, which is scheduled for early 2017, as the blinds block out sunlight and allow exhibits to start returning to their new home.

The bespoke designs, showing Quentin's trademark humour and love of the natural world, depict museum specimens, such as a cartoon of a Finback Whale, inspired by the 70-foot skeleton which will hang in the museum's entrance; the Aldabra Giant Tortoise patiently posing for its portrait; and Charles Darwin collecting beetles from the fields around Cambridge.

As Quentin, explained: “I was given lots and lots of unusual material and was able to choose among that.  They gave me pictures of the creatures, but the stories that go with them were particularly good, and I chose those that had stories:  Darwin and the beetles is particularly good. He had two beetles and wanted to get hold of a third, so put one into his mouth, and it spurted acid down his throat and he lost them.  It's stories like that that bring it alive to people."
Professor Paul Brakefield, director of the Museum of Zoology, said, “I am delighted that Sir Quentin Blake is working with us on the re-opening project. His skill at depicting the specimens and their collectors in a fun and colourful way really adds an extra dimension to the museum. We are very excited that the blinds are now up, and that the exhibits will now start heading back to the museum from our stores, ahead of the re-opening in 2017."

These blinds are the second piece of Quentin's public art to go on permanent display in Cambridge, as a mural he created to celebrate the 800th anniversary of Cambridge University in 2009 is displayed in the corridors at Addenbrooke's Hospital.
Links:
Visit the Museum of Zoology website for further details on the refurblishment.