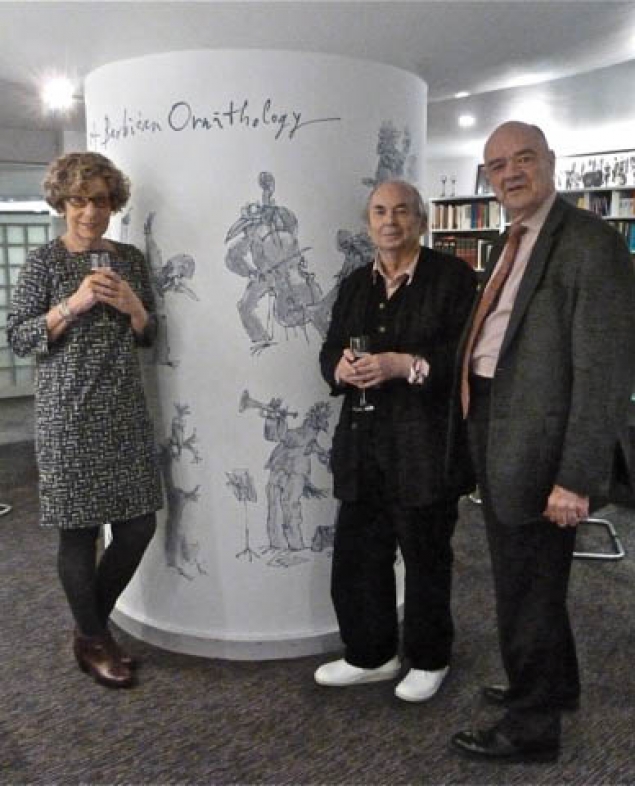 New birds fly in to the Barbican

The new work appears on a wrap which decorates a pillar in the centre of the office.  Quentin Blakeís artwork depicts a flock of birds shown participating in a variety of pursuits, from classical music to modern dance, art appreciation to fine dining, inspired by the activities of the human visitors to the building.

In common with much of his recent work for public spaces, Blakeís drawings were produced at normal size in the studio, and were enlarged at printing when a blue cast was also added to his original grey tones.  Designer Lexi Burgess printed the drawings onto a new type of wallpaper which, when wrapping the pillar, looks as though the drawings are printed directly onto it.

The pillar drawings are the latest in a series of works by Quentin Blake for public spaces.  So far these have included museums and hospitals in the UK and France; the largest of them was the five-storey-high wrap to cover the Stanley Building in the Kingsí Cross Regeneration area (2007) which greeted visitors as they emerged from St Pancras International station.

Photo: Quentin Blake with Nicholas and Ghislaine Kenyon at the official unveiling of the pillar.