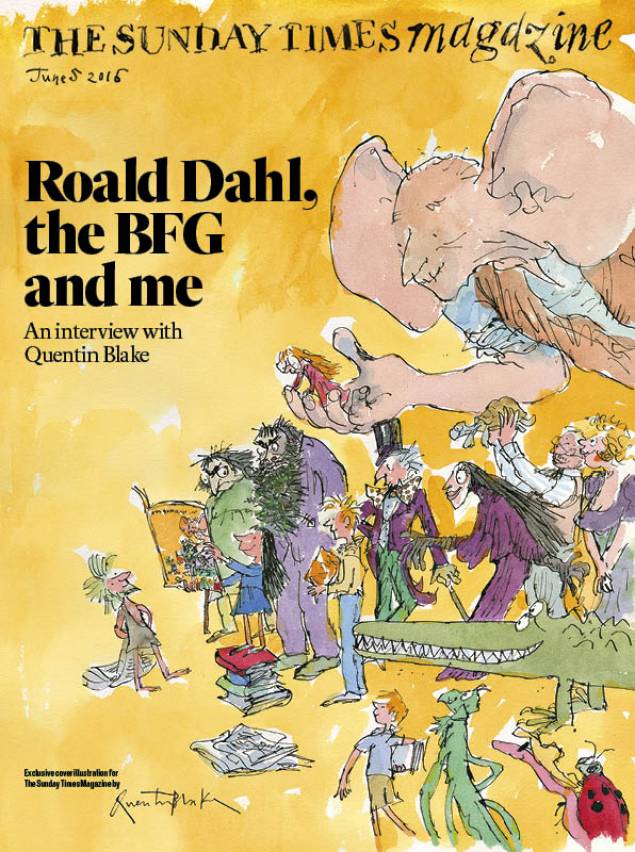 'Roald Dahl, the BFG and me' interview by Nicolette Jones

Interviewed in his London studio, Quentin Blake discussed working with Roald Dahl on many of his most memorable characters, from The BFG to Miss Trunchbull, meeting many challenges along the way, together with influences on his own life as an artist.

'I drew Miss Trunchbull as Roald had written her.  She looked like a fascist general' recalled Quentin, who had followed Roald Dahl's text to create a mustachioed, short-haired harridan in a collar and tie and boots.  Author and illustrator removed some of her more exaggerated features to make a character that looked more like 'a child's real headmistress'.  Famously, the alteration of clothing happened too with the BFG, who long apron and boots proved to be an encumbrance in many more exuberant drawings, so were removed from the text to be replaced by a waistcoat and sandals.

As well as his work with Roald Dahl, Quentin touched on his own career as an artist and illustrator, from its beginnings when he submitted cartoons to 'Punch' magaine while still a schoolboy.  Saying that his parents were supportive of his art, but their ambition for him was 'that I should get a job', he felt that his art education had really been 'cobbled together'.  Mentored by the likes of Brian Robb whilst he studied part-time at Chelsea School of Art, he recalls learning to draw by 'looking at draughtsmen from Daumier to George Cruickshank'.

He commented, 'You do have to say, sometimes, that illustrating children's books is a grown-up activity.... [it's] getting people to start thinking about something.  It's like a good lesson'; and on approaches to art in the current education system:  'Education is an art form, and you can't entirely measure it.'

The interview was published in the Sunday Times magazine on 5 June 2016, with a special cover illustration commissioned from Quentin Blake in celebration of Roald Dahl's centenary year.  Some of Dahl's best-loved characters gather around their own copy of the magazine (pictured, above).

Links:
Read the whole interview on the Sunday Times website (subscriber service)
A second interview by Nicolette Jones, 'Quentin Blake on working with a Big Friendly Giant' is featured on BBC Online, as part of the BBC's 'Awesome Authors' season.