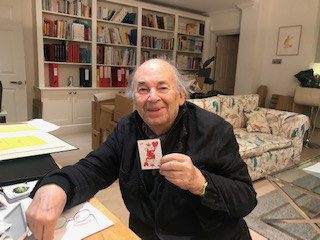 Quentin is 'King of Hearts' in TLC's Deck of Cards

Quentin has again supported the vital fundraising efforts of Transplant Links Community, a charity which brings the resources for  kidney transplants and training on kidney disease to the developing world, working towards the  long-term vision of a self-sustaining global network of successful well-supported transplant centres . Having contributed to art auctions by the charity in previous years, Quentin was pleased to be able to contribute an original drawing  of the King of Hearts, as this year's theme centred around the figures and numbers in a pack of playing cards.

The full deck of original drawings, which includes designs by Grayson Perry, Joanna Lumley and Floella Benjamin, among many others, is to be auctioned on 12 October at 7.00pm at Ewbank's auction rooms in Woking.  Bidders can join in online or in person, and all the lots are available to view on Ewbank's website, with the live auction broadcast via webcam.

TLC founder Jennie Jewitt-Harris said: "This is a rare opportunity to own a piece of incredible original artwork by a household name whilst raising money to save lives. The money we raise from this auction will go directly to training more doctors, surgeons and nurses."

Baroness Floella Benjamin, patron of TLC, and designer of the Ace of Hearts said, "We take for granted the incredible healthcare system in the UK. Life expectancy without a kidney transplant in Africa is just 3 months. TLC works tirelessly to help save and improve the lives of people living in Africa and the Caribbean requiring kidney transplants by training local healthcare professionals to perform successful operations."
The charity has also produced special edition complete packs of the cards containing copies of all the artwork.  These can be purchased direct from from TLC for £15.