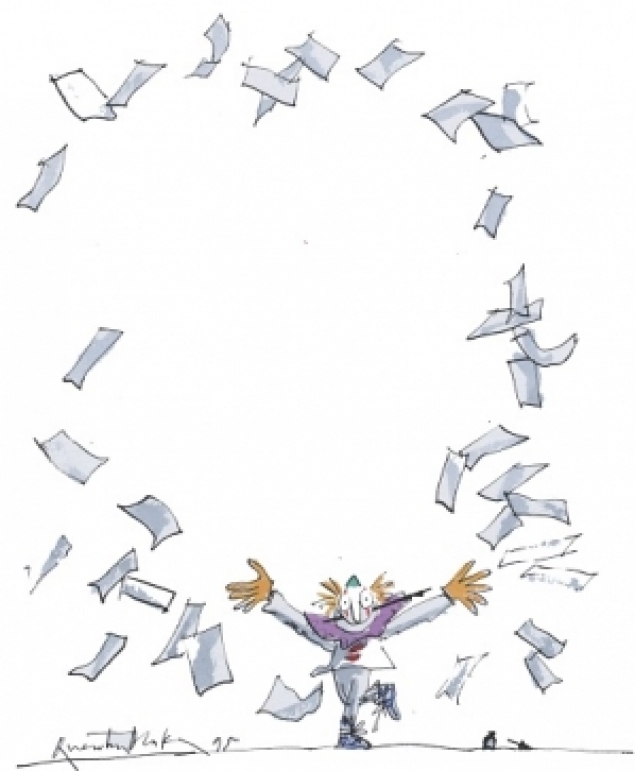 How the idea of the House of Illustration came about
In an interview with Arts editor, Ariane Bankes, Quentin explained more about the origins of the newly-opened House of Illustration in King's Cross.  He described a dinner, over ten years ago, where he discussed with fellow-illustrator Emma Chichester Clark and writer Joanna Carey what should happen to safeguard his archive of several thousand drawings and books, complied and created during (even then) a lifetime's work.  They imagined 'a church hall, in Hammersmith somewhere' which would house all these treasures: and so the idea of the House of Illustration was born.

The current incarnation of the House of Illustration has changed from those early days, quickly moving away from a 'museum' to Quentin Blake alone and becoming the world's first centre dedicated solely to illustration, in all its forms.  Though it does not have space to house Quentin's archive or a permanent collection, it has already built a reputation founded on several touring exhibitions, including In All Directions, an exhibition on the theme of travel in illustration, which toured the UK extensively in 2006.

In ten years' time, Quentin says, his hope is that '..it will be a catalyst, for illustrators, for schools, for children from all over the country and beyond.  If I'm honest, I hope it'll be three times as big - the natural place to discover narrative art altogether'.

Links:
Read the full text of the article in the online edition of the Spectator for 5 July 2014
Visit the House of Illustration website for full details of opening times and prices.  Quentin Blake's exhibition 'Inside Stories' runs until 2 November.