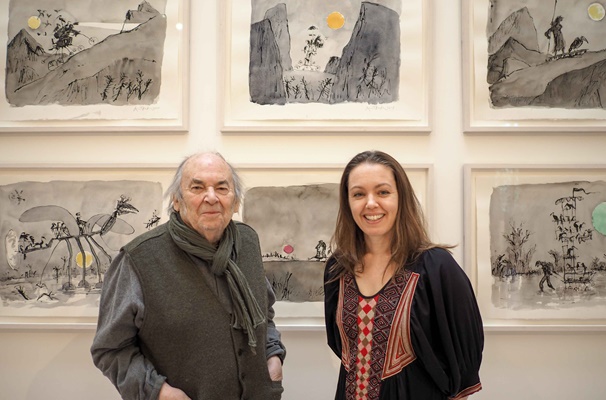 Jerwood Gallery announced on 23 March that Sir Quentin Blake has agreed to become its first Artist Patron.   The official announcement was made at the Hastings gallery, along with news that from 30 March, children can visit the gallery for free, when accompanied by a paying adult.  The initiative has been enabled by Arts Council England’s National Portfolio Organisation funding, as Jerwood Gallery joins the portfolio of funded organisations this April, and support from Hastings Borough Council.

Sir Quentin has a long association with Jerwood Gallery and has been a high-profile supporter since 2012, when it first opened to the public. Since then he has exhibited four times at what is effectively his local art gallery - based as it is, just a short walk from his house in Hastings Old Town.  Speaking in 2017, Sir Quentin has said: “What I could never have imagined is that someone would build an art gallery at the end of my road which is within walking distance, that’s wonderful, and it’s such a nice art gallery as well. It’s absolutely what one could wish.”

Quentin’s profile also makes him an ideal ambassador for Jerwood Gallery, as director Liz Gilmore explains: “His appeal is almost universal, as successive generations have grown up with his work or are familiar with his illustrations for the likes of Michael Rosen, Roald Dahl and David Walliams. His popularity and sheer accessibility makes him an almost unique route into art, with his work creating a natural transition from popular to fine art.  It is a great honour for Jerwood Gallery that he has agreed to the role and we look forward to working more closely with him in the years to come.”

Gilmore, her colleagues and trustees were also struck by Blake’s passion and commitment towards Hastings and Jerwood Gallery, making him an ideal candidate for the role of patron.
On becoming the Jerwood Gallery's first Artist Patron,  Quentin Blake said “It’s wonderful to be able to cement my relationship with the gallery by becoming a Patron. Collaborating with the Jerwood has opened up for me possibilities in my work that I would not have discovered without the encouragement of Liz Gilmore and her colleagues. Their expectations have prompted me to explore new approaches and enabled me to touch on new themes (migration, mental health, and other aspects of our lives) in the knowledge that the results will find themselves sympathetically shown in this extraordinary gallery. They are truly pictures for Jerwood Gallery.”