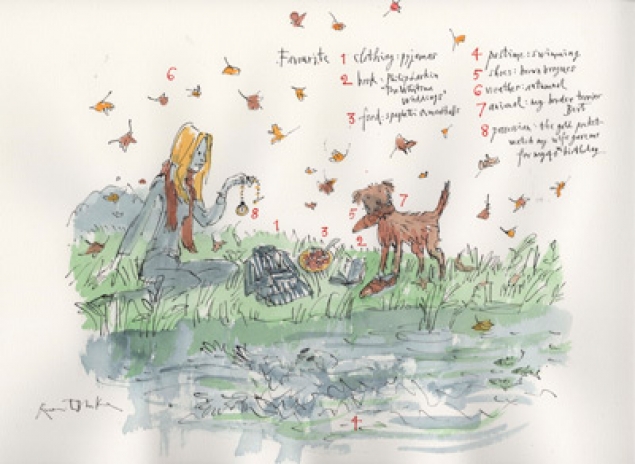 House of Illustration 'What are They Like?' at Swiss Cottage Gallery

The new show from the House of Illustration, 'What Are They Like?' runs at Swiss Cottage Gallery (Swiss Cottage Central Library, 88 Avenue Road, London NW3 3HA) from 5 April - 25 May 2013.
It is a follow-up to the HOI's original exhibition 'What Are You Like?' (2008), taking up the idea of a Victorian parlour game of describing yourself with images of your favourite things; like a cryptic visual essay, a self-portrait.

In 2012 the HOI asked sixteen people in the public eye, including David Walliams, Michael Morpurgo, Joanna Lumley, Jamie Lee Curtis and Florence Welch, to provide a list of their favourite things. These favourite things were then illustrated by a range of illustrators including Quentin Blake, Posy Simmonds, Emma Chichester Clark, Peter Blegvad & Paula Rego. The resulting original artworks were exhibited and auctioned at Sotheby's in December 2012 to support the work of the House of Illustration. This show is a facsimile exhibition.

During the Easter holidays (on 9 and 11 April) are two drop-in workshops for the whole family to enjoy, and are suitable for all ages. Maximum of 25 participants at any one time.  Click here to see more details on the House of Illustration website